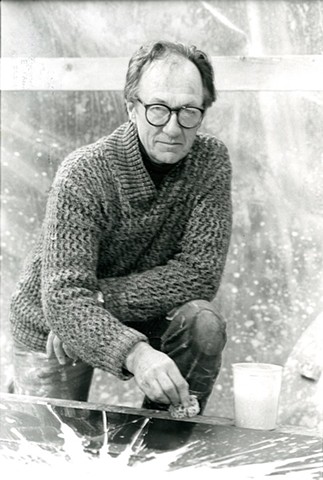 One of America's preeminent ceramists, Robert Sperry was a restless creative force who helped shape the University of Washington's ceramics program into one of the country's most influential. Hailed as "one of the great contributors to ceramic art as we know it today," Sperry pushed clay to its boundaries as a medium (Armstrong, in Bright Abyss, 7). Fascinated with chemistry from an early age, he always considered himself an experimentalist. He brought an inquiring, scientific mind to his work as an artist, but what he loved most about ceramics was the element of chance. First perfecting his craft as a potter and glaze technician, Sperry expanded the decorative possibilities for functional ware, then explored the realms of sculpture, abstract expressionism, and large-scale public-art murals. He was also a painter, printmaker, and filmmaker who helped launch the UW's film program and co-founded Northwest Designer Craftsmen. Works by Sperry appear in numerous collections, including the Smithsonian's National Museum of American History and the Renwick Gallery, both in Washington, D.C.; the Los Angeles County Museum of Art; Seattle Art Museum; and Seoul Metropolitan Museum of Art in Korea.